Those who know me understand I am not passive.

but I have plenty of reasons to leave.

Those who know me justify my 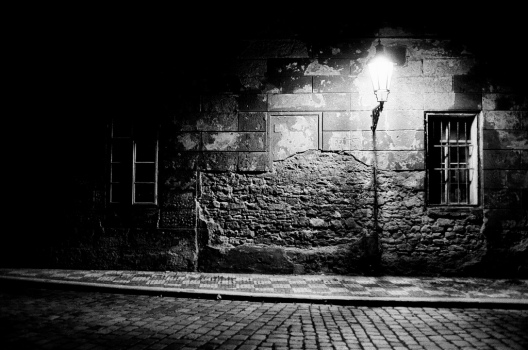 They have long ceased to care.

In silence they compare me with characters

of Russian books read in times of hunger and weariness.

An old man arrives and asks if I am cold.

I shake my head while trying to evade his conversation.

It doesn’t seem to matter the fact that I am totally ignoring him.

Then he takes my hand,

“I was like you”, he whispers in my ear as he disappears in the crowd.

A bus swiftly passes by leaving a thick trail of smoke.

The night begins to fall. The park becomes shelter for wolves.

Those who know me call me Sonny, Tormented Poor Boy.

They show their teeth hoping I will return them a smile.

At night those who know me are no longer able

to distinguish myself in the dark.

I see the wolves approaching and I stand still.

There’s something in their eyes that chilled me in the inside.

I let them eat me slowly while I satisfy my own hunger.

The old man discovers the scene and quickly runs thru…

as if he never knew me. Ashamed, in disgust he runs.

Today I decided to give myself in

when I still have superfluous reasons to leave.

Those who know me understand I am not passive,

but none of them is walking around this night.