She wanted to quit her job and ride her bike. Her bike was baby blue with a big cushion seat and had reflectors just in the front wheel. She was not dull, but didn’t have many friends. Her round face was pale and when exposed to the summer heat, will turn very red, like a clown’s nose. Her name was Clementine. Her father had named her after his mother. She hated that name very much, so when asked she will say; “Maria, Maria is my name” and her pale/red face will turn e 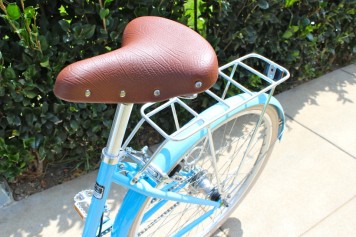 ven redder. She had a boyfriend; his name was Tom. Tom treated her like a dog. He used to call her woman and she would come right away. She was not in love with him, but he was a great fuck. She loved to fuck, especially in the mornings. She was a very horny woman and Tom had a great dick and liked to go down on her all the time. When she mentioned the idea of quitting her job he said: “I don’t give a fuck” and walked away to the kitchen and grabbed another beer. Next morning she woke up early. Paul was a very large man, bald and repulsive at first look. Paul was her supervisor. His office smelled like pee and rotten eggs. Many times he tried to cross the line with her, but she needed the job so said nothing.

On her way out many women waved at her with hope in their eyes. She smiled and kept on going. The bicycle was chained to a light pole right outside the factory… waiting.